"I Don't Think My Company Tells Me The Truth" 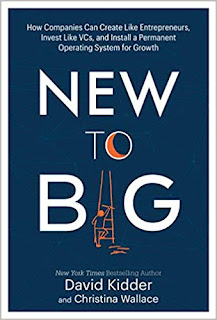 I recently read a great interview, conducted by Wharton's Mack Institute for Innovation Management, with accomplished entrepreneur and angel investor David Kidder (author of the new book, New To Big).   Kidder talks about how to create an environment conducive to growth and innovation.   He explains the keys to "productive failure" as part of that culture.  Here is an excerpt:

I think there are a couple qualities to productive failure. One is that it was done inexpensively. You got to a truth on a cost basis that was much, much less than say the planning model, which makes predictions and then tries to make them true. The cost base of the learning is really important. Secondly is that the person who’s delivering that productive failure is actually telling the commercial truth. Often when I do my keynotes, the CEO of the company will come to me and say, “I don’t think my company tells me the truth.” And my response to this is, “Because it doesn’t, because your cost of failure is too high.” You have these amazing people who want this company to be successful, but the organization is largely intellectually dishonest... As a result of this, you have these zombie ideas, these zombie companies, these zombie programs that literally won’t die because there are people who are trying to make their ideas work. Here’s a rule of investing: You never invest in an entrepreneur who loves their idea, ever, because they have no elasticity or permission to change it. You want to invest in entrepreneurs who are obsessed with the customer problem, with total permission to solve it, even if it means letting go of truths about yourself or your product that are no longer true. I think that, coming full circle, you need to have the mindset and mechanics and the permission inside the leader and the organization so that people are in a position to actually lower the cost of failure and, as well, they can tell you the truth.

I love the notion that you don't want people who are in love with their ideas.  You want people in love with a perplexing problem, people who are willing to learn and to shed ideas that are not working.   I also think it's very important for CEOs to acknowledge that people aren't telling them the truth in all cases, and then to discover WHY that might be the case.  What have those leaders done that has discouraged people from telling the truth?
Posted by Michael Roberto at 8/08/2019 04:24:00 AM

My newest book, Unlocking Creativity, will be released on January 7, 2019 by Wiley. I have published two previous books based upon my research: Why Great Leaders Don't Take Yes For An Answer (2nd edition, 2013), and Know What You Don't Know (2009).