Changes in Leadership, Reflection, and Reduced Commitment to Outdated Plans 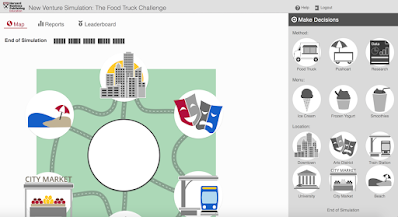 University of North Carolina scholars Hanna Kalmanovich-Cohen, Matthew Pearsall, and Jessica Siegel Christian have published an interesting new study in a paper titled, "The effects of leadership change on team escalation of commitment."  The authors completed two studies as part of this research project.  In one of those studies, they conducted an experiment using the Food Truck Challenge simulation that I created in partnership with Harvard Business Publishing.   In the simulation, students try to maximize revenue for a food truck business.  To accomplish that goal, they must try to determine the optimal location and menu for the truck.
The scholars created teams of three students and assigned a leader to each group.   For 1/2 of the teams, the researchers changed the group leaders after the first round of the simulation.  For the other teams, the leader remained the same throughout the game.   The scholars wanted to understand whether a change in leadership would reduce commitment to outdated plans.  Would new leaders engage in thoughtful reflection with their team about past choices? Would they examine feedback and adapt more effectively?   The researchers summarized their findings as follows:
We found evidence that a new leader promoted reflection behaviors within the team and reduced commitment to outdated plans. Therefore, teams that experienced leadership change avoided escalation of commitment over time. Further, such teams were better able to respond to feedback, to identify and correct errors in their updated plan and make course corrections by focusing on error reduction. In contrast, teams with ongoing leaders were more likely to remain committed to their initial plans, which then lead to greater escalation behavior and less of a focus on error reduction in the next performance episode.
What's the practical implication of this research finding? The scholars elaborate:
Leaders and teams can be trained in situation assessment, and to question whether objectives and methods are still appropriate and whether alternative courses of action may be viable, especially following environmental or other changes (Gurtner, Tschan, Semmer, & Nägele, 2007; Konradt et al., 2016). By finding ways to incorporate reflection into their regular activities, employees can better understand their actions and carefully diagnose the gap between what actually happened with what should or could have happened.
The results may not surprise us, but they remind us of the powerful impact that sunk costs can have on our decision making.   Moreover, the study demonstrates the importance of reviewing and evaluating our past decisions critically, being willing to updating our beliefs as new evidence emerges, and being open to adapting in the face of results that did not meet expectations.  We shouldn't need a new leader to shed outdated plans.  We need to get better at doing so without a change in leadership.  However, we also must remind ourselves that a new leader alone, without critical reflection, will not save us from poorly designed and seriously outdated plans.
Posted by Michael Roberto at 10/07/2020 10:38:00 AM