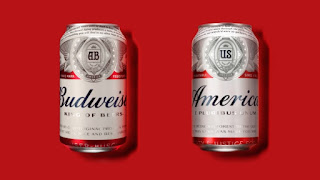 By now you probably have heard that Budweiser plans to rebrand itself as "America" for the summer and fall.  The Wall Street Journal reports on the move, and it explains the rationale:

Budweiser has been making a concerted effort to shake up its image in recent years with bold marketing campaigns. The brand has been losing market share for more than 25 years as younger drinkers increasingly opt for pale ales and cocktails over the King of Beers. The company’s “Brewed the Hard Way” ad, launched during the 2015 Super Bowl, criticized craft brewers for making beer to be fussed over while Bud brewed beer “for drinking.”  This summer’s packaging builds on that by framing Budweiser as more American than competitors. “This is bold and new,“ said Ricardo Marques, vice president, Budweiser. He added that the brand needs “to surprise” consumers, especially during the key summer sales month.

Budweiser clearly is searching for ways to combat the loss in market share.   The brand has lost share both to light beers in the mainstream portion of the market, as well as the emergence of a strong craft beer segment in the industry. Bud Light displaced Budweiser as the top beer brand in the U.S. in 2001, and Coors Light overtook Budweiser for the second spot ten years later.   Meanwhile, craft brews accounted for more than 10% of the market for the first time in 2014.

What are the risks of this rebranding campaign?  The Financial Times reported on a few potential downsides in an article this week.  Here's my take.  First, it might seem odd to actually take your brand's name off of the product.  Will people still recognize it on the shelf?  I don't think that is a problem at all. The Budweiser can is iconic.  People will easily spot it on the shelf.  Perhaps more seriously, one has to wonder whether some customers will complain since Budweiser is no longer owned by an American company.  AB Inbev is the parent company, and it's based in Belgium.  Finally, how might the rebranding play out on social media?   Could the campaign shift in unexpected directions, particularly as an incredibly unpredictable and perhaps tumultous US election campaign unfolds?  The rebranding is a bold effort to jumpstart a slumping brand, but it does have some potential risks. Executives might feel that they have no choice.  Miller's core brand was once Miller High Life.   Look what happened to that once iconic brand.