Identify and Address Friction to Sell Your Creative Ideas 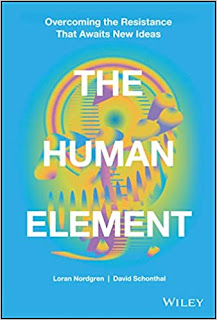 Loran Nordgren and David Schonthal have published a new book titled "The Human Element: Overcoming the Resistance that Awaits New Ideas."   In the book, they focus on how to persuade others to support and endorse your innovative ideas.   Nordgren and Schonthal argue that one must identify the sources of "friction" that might cause people to resist your proposal.  Many innovators work very hard to convince others of the highly attractive new features of their concept.  However, they don't spend enough time understanding the obstacles that might cause people to be hesitant to adopt, despite the attractive attributes being offered.   The authors explain that four sources of friction exist:
Inertia: Does the idea represent a major change?
Effort: What is the cost of implementation?
Reactance: Does the audience feel pressured to change?
Emotion: What negative feelings might the idea produce?
To address the sources of friction, you may change attributes of your new concept, and/or you may change the messaging around the idea.  To do this effectively, you must demonstrate a great deal of empathy.  You must step into the other person's shoes and understand their pain points and frustrations.   You have to understand why they might not see the new idea the same way you do, despite its compelling features and characteristics.
Posted by Michael Roberto at 7/19/2021 10:16:00 AM