Perhaps you have heard this story of how the American Red Cross averted a social media crisis some time ago.  I heard about this incident from one of our accomplished Bryant alumna with expertise in social media.  I felt that the lesson was worth sharing for those who have not heard about it.  The story can be told by three tweets.  First, an employee at the Red Cross mistakenly used the Red Cross official account, rather than her personal Twitter account, to write about her personal (drinking) behavior: 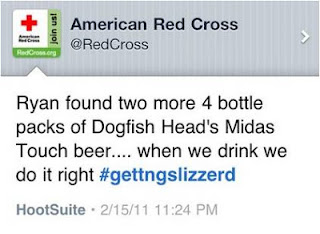 Ok, so now we have a problem.  It's not a major crisis.  The Red Cross could simply have issued a standard apology.  However, they added a creative twist.  They used a bit of humor to spice up their apology.  Here's the tweet: 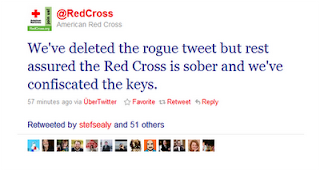 The story gets better.  Then Michael Hayek of Dogfish Head Brewery noticed the events transpiring on Twitter.  He chimed in with a third tweet.

Shazam!  The Red Cross managed to turn a mini-crisis into a positive moment.  For me, it shows the value of using a bit of humor appropriately to handle problems that sometimes emerge on social media.  Moreover, it shows how you can turn negative moments into positive ones with some creativity.   For Dogfish, it was a good moment to connect with fans and encourage them to do something positive for a worthwhile charity.  Talk about a win-win scenario.

Nice work dude. thanks for sharing this useful article with us. keep it up.
By
Ron James
Get Pinterest Followers

Here provided 10 tips seems to me really very buy active instagram followers handy for becoming a social media expert and I hope every willing person will get here provided tips effective for them. Thanks for this valuable input.