The Wall Street Journal reports today that Walt Disney CEO Bob Iger indicated that the company would not be divesting its local television stations.  He said that, as long as the firm owned the broadcast network, it would also stay in the business of operating some local affiliates.  However, when pressed as to whether Disney might consider divesting both ABC and the local affiliates, Iger seemed more noncommittal.

In my strategic management courses, I push my students to consider the merits of Disney's vertical integration strategy with regard to the purchase of ABC in the 1990s.   Interestingly, many entertainment firms pursued vertical integration strategies at that time (think AOL-Time Warner and Viacom-CBS), but many of those companies have reversed those strategies in recent years.   I often remind students that herd behavior happens in industries... in the 1990s, vertical integration became the conventional wisdom.  At a second glance, there are many arguments against the purchase of a broadcast network by a content provider such as Disney.   Here are two stock charts.  The first shows the Disney stock performance from the day Michael Eisner became CEO until the day prior to the announcement of the ABC deal.  The second shows the stock performance from the day of the deal until Eisner's resignation.   As you can see, the stock outperformed the S&P 500 index by a wide margin prior to the deal, but underperformed after the acquisition.  Clearly, other factors caused the subpar performance post-deal, but still, the chart suggests that this vertical integration play may not have been as positive as envisioned at first. 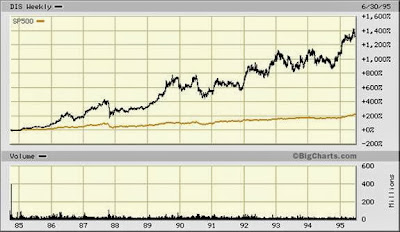